Beth Levison is no stranger to having her films on Independent Lens. Notable producing credits include Women in Blue and the Emmy-nominated Made in Boise. For her latest film, Storm Lake, she partnered with Jerry Risius, the much sought-after director of photography for Anthony Bourdain’s two TV series Parts Unknown (CNN) and No Reservations (Travel Channel), The Kingmaker (Showtime), and Generation Wealth. As co-director alongside Levison, Risius makes his directorial debut with Storm Lake, set in his native Iowa.

Storm Lake is about all things big and small. It’s about a family-run newspaper, still printing in an era when even larger city newspapers are going away, and the Pulitzer Prize-winning editor/patriarch at the center of it.  It’s about small-town farmers struggling in an era when Big Agriculture is enveloping the landscape. And it’s about the importance of independent journalism now more than ever, with the media landscape continuously evolving amid the cruel realities of the times.

“Editor Art Cullen and his family-run newspaper The Storm Lake Times make fascinating subject matter for a portrait of American resilience and unity through fractious times,” wrote David Rooney in The Hollywood Reporter. “Jerry Risius and Beth Levison’s astutely observed doc is a vital celebration of the role of community-based news gathering at a time when media revenues are way down and the credibility of the press has taken a hammering across much of the country.”

The filmmakers talked to us about the making of Storm Lake, why this film is needed now, and what Art Cullen and his family are currently up to.

Why did you want to make this documentary? Why tell this story now?

We made this film, at first, because we felt that the voices of rural America and non-coastal journalists are largely unheard.  As the film progressed and we came more deeply to understand the relationship between local news and a healthy democracy, we became even more committed to the film and its themes—it’s worth noting that production took place at a particularly perilous moment in our American democracy.

The importance of the film continued to reveal itself as so many crises unfolded—around the status of immigrants in the U.S., the heightened COVID risk for essential workers (and in our case, meatpacking workers), and more. Ultimately, we felt that this story, unfolding in the smallest of towns in a corner of Northwest Iowa, touched on not only local themes, but truly national ones.

What do you hope PBS viewers take away from experiencing the film Storm Lake?

Our hope is that through the film, viewers come to revisit their own relationship to credible, local news.  What are viewers willing to do to support this pillar of our democracy?  We also hope that the film is in service to newspapers nationwide, who surprisingly and admittedly are quite poor at telling their own stories.

What were some of the biggest challenges you faced in getting Storm Lake made?

This was one of those films that had so much energy behind it to make it happen.  We had the support of ITVS and others.  We had a lean and talented team, appropriate for the job.

At the same time, there were challenges. We very much wanted to film in the Tyson [Foods] factory in Storm Lake and were denied access. It’s very hard to get into those places as a member of the press. Then, there was the challenge of COVID filming; by June 2020, Buena Vista County (Storm Lake is the county seat) Very early on in the virus’s course, we knew that we had to capture its impact.

We like to think that we were one of the first to start filming, and figuring out remote COVID production through Zoom and with good sound certainly presented a learning curve.

How did you connect with the Cullen family and become part of their lives to tell this story?

Jerry Risius grew up on a hog farm in Buffalo Center, Iowa, less than two hours from Storm Lake. In fact, his parents still live there—it’s home. Having this natural connection to the people and place was meaningful.

At the same time, the Cullens are incredible people and we simply connected with them.  From the get-go, we think we were really clear [about] what we hoped to achieve with the film—we wanted to tell their story— and they were on board. We remain in constant contact with them—they are not just subjects of the film but collaborators and friends.

Any favorite moments that you shot but couldn’t find the space for in the final cut of Storm Lake?

There were so many fantastic moments in the newsroom that we wish we could have included.  We had no idea how bustling, busy, and dynamic a rural newsroom could be (a newsroom with circulation 3,000).

Art was always writing something compelling for the editorial page. Tom was constantly and doggedly on the move, covering local stories and trying to get at their core. Then, Dolores was always finding human interest stories in Storm Lake that showed the depth and creativity of the community. Everyone—from John the publisher to Mary the food columnist, Jamie the sports writer, and Whitney, Jen, and Jenifer in the office—was always busy! We would set out some days for the office and have no idea what we would encounter, then we would come back to our hotel saying, “Wow! How about that?”

If there was one scene that we wanted to include, it was a scene about a “dangerous intersection” just outside of town. Over the course of filming, there were numerous fatalities there; if The Storm Lake Times hadn’t been there to continually report about it—and pressure the state government to add a stop sign—there might have been more.

For us, this scene shined a light on the potentially life-saving aspect of local news. What do towns that no longer have a newspaper do when there’s no local newspaper to raise awareness and concern about a dangerous intersection?

What was something that surprised you while making Storm Lake? And do you have any favorite scenes from the film, personally?

The entire process of filming Storm Lake had a huge impact on us, as we’re not sure we had any idea how busy, deadline-driven, and critically important a local newsroom could be. Making the film definitely challenged our assumptions about local news—its gathering and community role—and we hope that the film has this same impact on our audiences.

In terms of favorite scenes, filming with Art on John Snyder’s farm was a magical day—the corn, the light, the local banter. (“That’s gravy on your taters.”) At the same time, Dolores’s discovery of local singing phenomenon Emmanuel Trujillo was really exciting!

Finally, to have a front-row seat at the Iowa Caucuses was a once-in-a-lifetime experience, if not somewhat deflating; the national news counted Iowa out before the results were even in. Then, to witness the impact of COVID on the community and the Cullens was devastating, and we feared for the family, the newspaper, the full Storm Lake Times staff, and so many people we came to know. 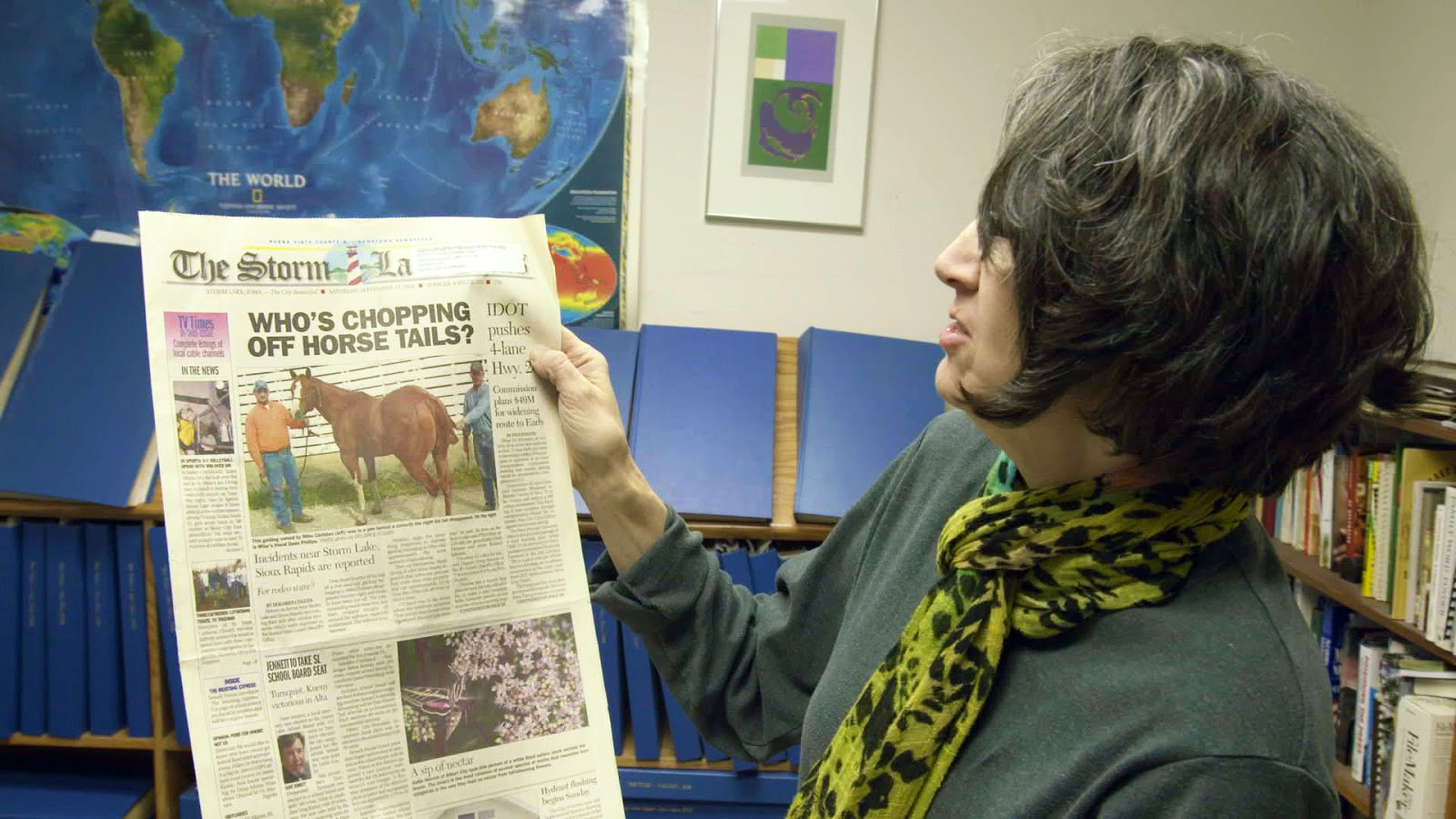 Anything else surprise you, or really stay with you long after leaving Iowa?

While director Jerry Risius grew up on a hog farm close by, Iowa was a real revelation for much of our crew. First of all, the place really is full of people from all over the world: Micronesia, Laos, Sudan, Latin America, and beyond. When Julian Castro says at the Heartland Forum, “I never thought before this campaign that I would get great Mexican food in Iowa, but I have!”, we knew what he was talking about. There are about four great Mexican restaurants in Storm Lake, but one in particular—LaJuanita’s—might have the best tacos north of the Rio Grande!

Then, the landscape is extraordinary. Corn fields really do stretch as far as the eye can see. And the grain elevators that rise up into the blue skies are like America’s version of the great pyramids. Another thing is the wind farms! The Buena Vista County Wind Farm is one of the largest wind projects in the world, with over 360 massive turbines stretching as high as 213 feet tall. It’s an aspect of Iowa that’s little talked about.

Then, a funny thing that film simply can’t communicate is the unique smell of Storm Lake. In the film, Dolores describes a trip to Albert City, Iowa, where it “reeked, again,” on account of hog confinements. We have to admit that we encountered that smell a time or two ourselves.

Last but not least, Iowa really does have a front row seat to the American political process and our presidential elections. It was both fascinating and difficult to be there during the 2020 caucus when so much went wrong and cable news was so quick to pounce on Iowa’s failures before the results were in. From the newsroom, Art laments, “Everybody is saying it’s gonna kill the Iowa caucuses.” We’re really curious to see if the Iowa caucuses return in 2024—or not.

Fun fact: If you want to speak like a local, say “Byoona” Vista County, not “Buena” Vista County. After about our third trip we managed to get it right. If and when you visit, practice before you get there and then you’ll really get treated with “Iowa nice!”

Do you have any updates on the main characters in Storm Lake—the family—you can share with our audience?

Storm Lake has had a very successful festival run, and Art, Dolores, Tom, John, and Mary are all pretty overwhelmed by the response to the film. They’re all still at the paper, although John is working a little bit less and Art is on social security now. In exciting news, we think that Art is entertaining the idea of a podcast after all. We’ll have to wait and see!

When pitching this film, we used to affectionately say that it’s Spotlight (Tom McCarthy) meets The Office (we hope to attract The Office audience!). But other films had an influence, too.  For example, the opening sequence with Art’s “Dear Supporters” letter was informed by the opening of Noah Baumbach’s Marriage Story.  Some of our newspaper moments were informed by iconic films like Alan Pakula’s All the President’s Men.

In making the film, Jerry talked about Salesman (Maysles brothers) and When We Were Kings (Leon Gast) as references and influences, as in those films, the shooting, editing, and music literally transport you to another land and time. We really wanted the film to draw audiences into both the newsroom and Storm Lake.

My (Beth’s) work has definitely been influenced by some other classic vérité films—Grey Gardens (the Maysles), The War Room (Chris Hegedus and D.A. Pennebaker), Some Kind of Monster, and others. I’m also inspired by independent fiction films. I recently saw Never Rarely Sometimes Always (Eliza Hittman), which was fantastic, and so impressive for its restraint and intimacy all at the same time.

Jerry is back to shooting all kinds of documentary films and pieces for CNN: United Shades of America, as well as another just-completed independent documentary called To Which We Belong, about soil health and climate change. 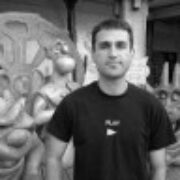 Source
A Family Run Newspaper, “Iowa Nice,” and Nothing Less Than the Precariousness of Democracy | Blog | Independent Lens is written by Craig Phillips for www.pbs.org